It was probably the first major waterfall that made us go “WoW!” during our June 2005 trip.

As you can see in the photo above, the waterfall plunged spectacularly over a 92m drop flowing wildly with unregulated force while also generating enough mist at its base to produce a bold afternoon rainbow.

The unregulated nature of this waterfall not only compelled us to think very favorably upon it, but it was also something we would come to appreciate as many of the waterfalls in Norway had been tapped for hydropower.

We’d later learn over the years that hydroelectricity was one of the country’s main sources of domestic energy generation.

Getting to Manafossen from the car park required us to go up a steep (and potentially slippery) uphill hike.

At first the trail began as a steep series of steps, where it seemed like improvements had been made to this part of the trail.

Back when we first did this hike in late June 2005, this incline was a steep pebbly slope.

As we got further up the trail, the footpath quickly degenerated into a series of even steeper climbs along a combination of granite slopes and some steps.

A good portion of this section of the climb (comprising the majority of the elevation gain to Manafossen) involved holding chain links held by poles bolted into the hard granite-like surface.

Due to the potential of slipping and falling here, we definitely had to take our time and make sure of our steps.

Under bad weather, these steep sections became even more dangerous due to the slick surfaces.

Indeed, it’s for this reason that hiking boots were essential for this hike.

Eventually after about 30-45 minutes of this persistent ascent, the trail started to flatten out somewhat as it reached a couple of spurs.

The first spur led to the first overlook of Manafossen, and this was the most popular spot to see it.

From this vantage point, we could not only see the entire plunge of the falls, but we could also see (if the clouds cooperate) a cascade higher up, which created the illusion that it fell right into the main falls.

This lookout did not have safety railings so we definitely had to use our better judgement and stay back from the dropoffs.

The second spur led to a second overlook of the falls, though it was a bit more direct and harder to see its entirety from there.

Like the first lookout, there were no safety railings to keep us from going over the edge.

There was also a narrow trail of use connecting the two overlooks along the cliff.

We managed to experience this waterfall in a variety of conditions over the years.

Weather does make a big difference in the experience here – not only because of the slick climb, but also because clouds can block the view.

This was the extent of our experiences with the Manafossen Waterfall, and we would typically spend around an hour away from the car.

Although we were content with just the views before coming back down to the car park, it was also possible to hike another 1km up to the Mån Farmstead.

We didn’t do that so we can’t say more about it, but apparently they made it possible to spend the night there as the farmstead also doubled as an accommodation as well as a museum.

Finally, when Julie and I drove up to the Manafossen car park (see directions below), we also spotted another smaller but attractive roadside waterfall called Eikeskogsfossen.

We didn’t bother finding a way to get closer to this waterfall as we were perfectly content to enjoy the falls from the road.

I’m guessing that this waterfall got its name from the neighboring community of Eikeskog, and that the immediate area might have been an oak forest.

According to my Norwegian dictionary, eik means “oak” and skog means “forest”.

Manafossen resides near Frafjord in the Gjesdal Municipality in Rogaland County, Norway. For information or inquiries about the area as well as current conditions, visit their website.

The key to reaching Manafossen was accessing the town of Gilja. We managed to reach the town from the west starting at Stavanger.

There are other seasonal routes coming inland from the east, but we’ll focus on describing the all-season driving route from Stavanger.

From Stavanger, we drove south on the E39 for a little over 28km towards the junction with the Fv45 Road in Gjesdal.

Taking a left to go east on the Fv45, we then drove a little over 26km towards the small town of Gilja.

At the turnoff at Gilja, we then followed the Manafossen signs telling us to go left to cross the bridge into the town.

Continuing straight on the what is now the Fv281, we soon entered the 4km long Frafjordtunnelen before continuing east on the Fv281 all the way to the head of the valley.

At a little over 9km from Gilja, the Fv281 reached a junction, where we then turned left to go uphill and out of the valley.

This road continued for the final 2.2km to the road’s end where the Manafossen car park was at.

Overall, this drive took us a little under 90 minutes.

The Manafossen car park did charge a fee payable by a drop envelope with cash or using the EZ-Park app on a mobile phone.

If using the app, you don’t get phone reception at the car park, but you do get reception along the trail about 500m from the trailhead. 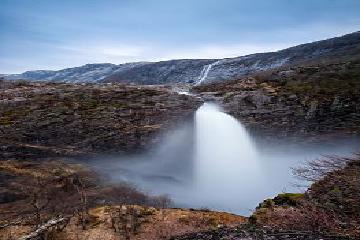