Tvindefossen (I’ve also seen it spelled Tvinnefossen) was a gorgeous 152m waterfall tumbling in strands with a graceful character.

We found this graceful character aspect of the waterfall that strangely contrasted the gushing waterfalls we had been used to seeing throughout Norway.

And perhaps that was what helped make it so popular and alluring, which we’ve noticed in our trips to see it both in 2005 and in 2019.

Of course, the fact that it was perhaps one of the easiest waterfalls to visit certainly helped in its popularity (especially with tour buses).

Indeed, Tvindefossen literally sat right off the E16 motorway as it was also close enough to the town of Voss.

Those factors combined certainly gave the falls quite a bit of notoriety, especially as it was both conspicuous and accessible to even the most casual waterfallers.

Thus, I had a bit of fun setting up the tripod and taking very long exposure photos to exploit its graceful character (see photo above).

Of course, crowds were something that came with the territory regarding this waterfall, and they were intense and came in waves.

We witnessed this firsthand when we were one of the first people to visit Tvindefossen on a cloudy morning in late June 2019.

Such is the price to pay when it comes to waterfalls that are so easily accessed.

Now given its relatively light flow, I reckon it can run dry not far into Summer.

In fact, the friendly hotel proprietor at the Vossestolen Hotel showed me a photo album containing a pair of photos of Tvindefossen.

In it, one photo showed the falls flowing well (like what I had seen earlier that morning).

Meanwhile, another photo showed the falls being dry.

This suggested to me that the falls was seasonal, and I’d imagine that Spring and early Summer would be the best times to see the falls flow reliably.

One thing that I didn’t realize until after our first Norway trip in 2005 was that Voss was the same town that inspired the brand of bottled water company by the same name.

I actually didn’t know this until a coworker bought me one of their bottled waters in a fancy art-deco-like glass bottle.

The town was also said to be known for Winter sports as well as Summer thrills.

Apparently, Voss was said to harbor Western Norway’s largest ski resort while also spawning more Winter Olympics participants than any other county in Norway (especially concerning the sport of biathlon).

The literature also suggested to us that Voss was an adrenaline junkie town with activities such as skydiving and mountain biking though they were activities that we didn’t engage in for neither of our visits in 2005 and 2019.

Tvindefossen resides near the city and municipality of Voss in Hordaland County, Norway. For information or inquiries about the area as well as current conditions, visit their website or Facebook page.

Visiting Tvindefossen was pretty straightforward as it was right off the E16.

From the town of Voss, we drove north on the E16 about 10km from the roundabout where the Rv13 became the E16.

The well-signed turnoff for Tvindefossen was on the left, where there was a fairly sizable car park around a souvenir shop (though it can get real crowded with tour buses taking up most of the space).

Coming from Flåm, we would drive west on the E16 for about 53km before turning right onto the Tvinnevegen (well-signed and easy to spot since the waterfall is right by the road).

This drive would take under an hour.

Focusing on the falls as I was approaching it


Sweep starting from the base of the falls before checking out the surroundings and the falls itself. Then, I walk backwards and reveal more of the falls as I get further back 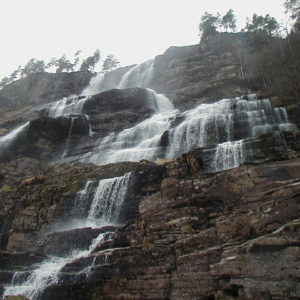 Camping next to this waterfall March 3, 2021 1:18 pm by Brian Jeppesen - What a treat to read thru this entry. I spent 3 nights with my daughter and her family in one of the cabins a short walk away from the base of this waterfall. I enjoyed the soothing sound as it helped me fall asleep each night. We took a very short hike to the top… ...Read More