Hidden Falls was a satisfying 75-100ft waterfall at the far end of the scenic Jenny Lake, which fronted the signature skyline of the Grand Teton Range.

To our knowledge, this was the most accessible of the significant waterfalls in Grand Teton National Park.

Apparently, legitimate waterfalls were surprisingly rare in the Grand Tetons, especially compared to the plethora of the many easy-to-see waterfalls in the neighboring Yellowstone National Park to the north.

Indeed, most of the Grand Teton Waterfalls were either too difficult to reach or were nothing more than temporary or unremarkable snowmelt cascades (in our opinion, at least).

I suspect that the falls got its name because it fell mostly unseen to all but hikers on the Cascade Canyon Trail as it was nestled in a deep canyon surrounded by tall trees.

Hiking Options with or without the Boat Shuttle

As the most accessible of the Grand Teton Waterfalls, Hidden Falls was also very busy.

To reach the falls, we paid for one of the frequent boat shuttles (which left about every 20 minutes between 8am to 6pm) going across Jenny Lake.

This reduced an otherwise moderately long 5.2-mile round trip hike to a much more manageable 1.2 miles round trip.

With the shorter hike, it also made continuing the hike up into the scenic Cascade Canyon for more mountain scenery more attractive.

In fact, Julie and I did go up there when we first visited this place back in late June 2004.

There was also the option of taking the boat to the far end of Jenny Lake then hiking back.

Experiencing Hidden Falls in this manner would have made the hike more on the order of 4 miles in total.

From the boat dock at the far western end of Jenny Lake, we followed a well-used uphill trail.

It initially involved steps flanked by bush (many of which had huckleberries growing out of them) and tall trees.

That said, there were always enough of the peaks in sight to tempt us to take more photos or at least tease us into hiking further to get closer to those mountains.

About a quarter-mile up the 0.6-mile of hiking to reach the Hidden Falls, the trail crossed a trail junction.

Then, it skirted along the rushing Cascade Creek presenting more intermediate cascades and rapids as the trail switched between steps, dirt, and granite surfaces.

Eventually, the trail crossed over Cascade Creek before curving back and encountering another trail junction.

We kept left at this junction to hike the remaining spur trail leading past a sloping field of boulders to a lookout for the Hidden Falls.

The path on the right crossed another bridge then would climb up towards a pair of Inspiration Point Overlooks (both looking back towards Jenny Lake).

Beyond the overlooks, the trail then entered Cascade Canyon where the 13,000ft peaks flanking the canyon itself would be clearly in view.

There was limited space at the spacious lookout where the views of the Hidden Falls were choice, which meant that it could get a bit on the busy and claustrophobic side.

The viewing area also opened out at the end towards a cliff face where we noticed rock climbers ascending it.

After having our fill of this lookout, we headed back to the boat and ended the short excursion in a leisurely two hours away from the car.

We especially took our time because both Julie and Tahia were at it again picking huckleberries.

Beyond Hidden Falls, the trail continued climbing and really making it a sweaty and heavy-breathing affair.

The path was a little big rugged, but it was well-used and quite easy-to-follow.

Along the way, we got some pretty nice panoramas of the plains to the east as well as Jenny Lake itself, especially from the Inspiration Point lookouts.

The Inspiration Point was about 0.4 miles beyond the Hidden Falls spur, and the mouth of Cascade Canyon was around another 0.5-mile further.

The climb was pretty steep, but it flattened out once inside the canyon.

Once inside Cascade Canyon, it was pretty much a scenic hike where the turnaround point is up to you (we maybe went another quarter- to half-mile in).

Hidden Falls resides in Grand Teton National Park near Jackson in Teton County, Wyoming. It is administered by the National Park Service. For more information or inquiries as well as current conditions, visit their website.

Hidden Falls was west of Jenny Lake and beneath the mouth of Cascade Canyon.

The turnoff for the Jenny Lake Boat Dock and Visitor Center was about 13 miles southwest of the Moran Junction a short distance off the Teton Park Rd (the so-called Inner Loop Road) just past the junction with the Jenny Lake Rd.

Even though there were quite a few parking spaces in lots flanking the Jenny Lake Campground Road, it was still very busy and congested.

So we saw plenty of people parking on the road shoulders along this road.

The nearest parking lot to the Jenny Lake Visitor Center and Boat Launch was at the end of this road.

The Moran Junction was about a mile south of the turnoff for the Jackson Lake Lodge and about 4 miles west of the Moran Entrance Station for the Grand Teton National Park. 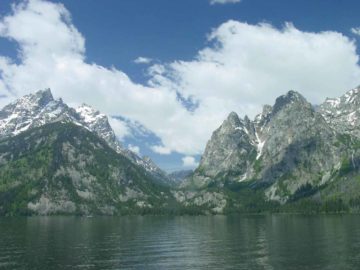