Jump Creek Falls was seemingly a locals’ kind of waterfall, especially since we had to navigate through a maze of private property to even find this gem not far from Boise, Idaho.

What really made this waterfall stand out in our minds was the combination of the overhanging, colorful, and narrow walls of Jump Creek Canyon.

Such walls surrounded the falls itself as well as along the short hike to get there.

Indeed, the waterfall was merely the sideshow to the short but attractive canyon that very much reminded us of something we would have expected to see in the deserts of the American Southwest instead of Southwestern Idaho.

Jump Creek Falls itself was said to be around 50ft tall.

We happened to see it in moderate to low flow during our late April 2013 visit on a pretty hot day in the mid 80s.

So the shadiness of our late afternoon visit to the falls certainly provided us with some kind of relief from the heat in the otherwise dry, dusty, and desolate canyonlands.

Aside from one other pair of ladies who were on their way out, Julie and I had the falls to ourselves during our first visit back in late April 2013.

So the only sounds we heard (besides the ones we’ve made walking about and snapping photos) were that of some local pidgeons and the white noise of the Jump Creek Falls itself splashing into its calm plunge pool.

Unfortunately, as time went on, when we returned to Jump Creek Falls in April 2021, it seemed like the secret was out and this place really blew up in popularity.

The Short Hike to the Base of Jump Creek Falls

The walk from the mouth of Jump Creek Canyon to the Jump Creek Falls was merely about a quarter-mile.

We had to cross the creek once, but given the tame waterflow, we only needed to rock hop to get across without the risk of getting our feet wet.

In fact, when we came back here on our second visit (8 years after our first visit in late April 2013), some of thes rocks were actually replaced by stepping stones!

Speaking of the waterflow, apparently early to mid Spring would be the most optimal times to view this waterfall because it could be trickling or dry by Summer (depending on the snow pack and melt).

Many of the canyon walls seen during the hike seemed to feature some holes, alcoves, or even some tiny natural arches.

I recalled seeing one on a cliff above Jump Creek Falls that appeared to be a pinhole type of arch.

Meanwhile, there was an arch shaped like a jug handle above the walking trail as well.

Given the height of the cliff walls and their close proximity around us, it almost felt as if these vertical walls were closing in on us as we were at the base of the falls.

That was how tight this short but gorgeous canyon was.

Of course with such beauty, we also spotted large boulders strewn about the alcove at the base of Jump Creek Falls.

They probably fell from the cliffs above us, and there was even a part of the fallen rocks where there was a tunnel-like hole leading to the rest of the alcove for a more direct view of the falls.

Nonetheless, the presence of these fallen rocks reminded us of the inherent danger of vertical cliffs shedding themselves over time.

So as much as we wanted to stick around here for a while, we were always cognizant of the rockfall danger.

Speaking of dangers, the slopes around the far side of the plunge pool area of Jump Creek Falls was quite slippery with loose gravel.

We noticed many people slipping and falling here (especially since the vast majority of them didn’t wear proper hiking shoes), and one woman bloodied up her knee pretty badly when she took a spill.

Luckily, we gave them some wipes and a bandage that they didn’t come prepared with, but it just goes to show you that you really have to respect the hazards in the area in order to avoid more serious problems and have a better experience.

Overall, we spent about an hour here to encompass the walking and photo taking.

Back at the trailhead, we noticed that there was a trail that went higher up the canyon.

This was actually the trail leading to the West Rim Overlook as well as the Jump Creek Falls Overlook.

So after an initial ascent out of the overflow parking area, I then encountered a trail junction, where I took the left path to remain within Jump Creek Canyon.

After about 1/4-mile, I reached the sanctioned overlook for the Jump Creek Falls as well as some signage urging visitors to remain on the maintained paths.

The presence of unofficial use-trails have resulted in dangerous erosion that would undermine visitor safety.

That said, I have seen use-trails going a little further past the sanctioned overlook to improve upon the views of the Jump Creek Falls further up ahead.

We said this was a locals waterfall because on our way out of our first visit in late April 2013, we noticed there were people starting to head to the canyon itself.

There were a few young men smoking and chilling out by some ugly graffiti in one dark alcove near the mouth of the canyon when we were leaving.

And given how tricky it was to even find the correct access roads to get to the Jump Creek Falls, it would make sense that only locals would have the confidence of knowing which roads to take to get here quickly.

Indeed, it felt as if we had stumbled into some secret place back then.

However, when we returned 8 years later, it seemed like this place was no longer such a secret as it was quite busy with many people.

Such is the nature of natural places like this, and I guess it was only a matter of time before the availability of free information accessed on the internet would blow up a place like this, especially during the COVID-19 pandemic.

Jump Creek Falls resides in the Jump Creek Recreation Area near Nampa in Owyhee County, Idaho. It is administered by the Bureau of Land Management. For information or inquiries about the area as well as current conditions, visit their website.

Jump Creek Falls was probably the closest waterfall excursion that we could find from the city of Boise, Idaho.

That was the main reason why we chose to do it.

That exit put us on the Hwy 55, which passed through the bustling suburb of Nampa.

There was some traffic in the Nampa area due to merging lanes before Hwy 55 passed through the Snake River Valley Wine Region between Nampa and Marsing.

We followed Hwy 55 on through the town of Marsing, where the highway eventually junctioned with the Hwy 95.

Next, we turned left onto Hwy 95 and drove for about 2.5 miles to the easy-to-miss Poison Creek Road on our right.

Then, we followed Poison Creek Road passing between lots of farms for about 3.5 miles or so until we reached a stop sign at a three-way intersection with Jump Creek Road.

We turned left onto Jump Creek Road and briefly followed it until the pavement ended where we were confronted with a fork.

At this fork, one road went straight into someone’s ranch and another road turned right past a cattle guard onto a sign that indicated there was a single-lane bridge.

I didn’t recall seeing this, but the Bureau of Land Management’s website indicated there were power transmission lines here.

So we took the fork on the right, crossed over the single-lane bridge, and avoided the private driveway on the left.

Shortly thereafter, the unpaved road we were following did a curve that went left towards the Jump Creek Recreation Area.

It was at this point that we started to notice some Jump Creek signs to help us stay on the correct roads so as to not trespass.

The road would eventually lead to the mouth of Jump Creek Canyon, where we encountered a one-way loop as the unpaved road entered a spillover parking area.

If available, there was a ramp that led down to a lower parking lot right at the Jump Creek Falls Trailhead, where there was some limited parking down there.

Alternate Directions from the BLM

about waterfalls in the Pacific Northwest.

The Bureau of Land Management’s website had a slightly different route where instead of taking Poison Creek Road south of the junction of US95 and Hwy 55, they advocated taking Cemetery Road 1.5 miles west of that junction on US95.

That road would eventually lead to a T-intersection with a stop sign where you turn left, and then continue as the road becomes Jump Creek Road.

The part where the paved road becomes unpaved still follows the same directions as we gave it earlier.


nearly 360-degree sweep starting with a peek-a-boo hole or arch above the falls, then panning down along the falls before sweeping over and around as the camera was pointing at the surrounding cliffs closing in on the cove we were in. The movie ends with a little tunnel or arch right next to us.

360-degree counterclockwise sweep along the cliff tops towering over us. In the sweep is a bottom up panning of the falls itself. 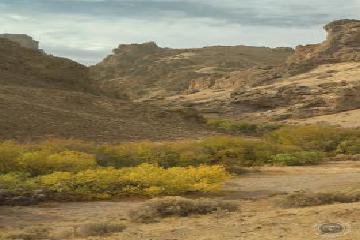 Jump Creek after the Soda fires October 20, 2015 10:53 pm by Louis Ruth - In July and August the Soda fires burned over 300,000 acres from Jordan valley to Marsing Idaho. One of the areas I visit as a photographer is Jump Creek Falls outside of Marsing. I thought it was spectacular that the trees survived the fires that follow the Canyon and the Fall colors show through brilliantly. ...Read More