Loowit Falls is a nearly 200ft plunging waterfall sitting in the heart of the blast crater resulting from the Mt St Helens eruption in May 1980.

As a result of its position, I suspect that this is a waterfall that’s relatively new since I don’t think it existed prior to the eruption.

Erosion is continuing to change the height and appearance of Loowit Falls since the current landscape is still in its infancy as far as geologic timescales are concerned.

Heck, we noticed a protruding (and growing) lava dome in the heart of the Mt St Helens crater so it might erupt and change the landscape yet again!

By the way, I felt that Loowit Falls is aptly named because Loowit is the Native American name for Mt St Helens, and the hike to reach this waterfall is always in the presence of the imposing nad volatile mountain.

Logistics of Hiking to Loowit Falls

If you know where to look, you might already notice Loowit Falls looking puny within the massive blast crater of Mt St Helens from the Windy Ridge Lookout at the end of the Windy Ridge Road (see directions below).

However, in order to get a more satisfying experience with the falls, I had to earn my visit because it involved doing a 9.2-mile round-trip hike with 500ft net elevation gain.

Due to the landscape still recovering after 40+ years since the major eruption in 1980, the whole hike lacked shade so I definitely needed to liberally apply sunscreen while bringing plenty of water.

It’s also possible to hike from the Johnston Ridge Observatory via the Boundary Trail to Loowit Falls, but you’re looking at over 14 miles round-trip, which would take most people the whole day.

Overall, my hike from the Windy Ridge Lookout to Loowit Falls and back took me nearly 5.5 hours total.

That said, if I didn’t allow for rests and spontaneous conversations with other hikers on the trail, I probably could have completed the hike in about 4 hours.

This is actually a service road that is not for the public to drive as only staff with the means to open the gate and drive past it could keep driving.

Therefore, my Gaia GPS map also referred to this unpaved road section as the Truman Trail (named after another person who lost his life after opting to stay on Mt St Helens when it was about to erupt).

Anyways, during this relatively easy two-mile section, it was pretty much like hiking on an oversized wide trail so it wasn’t surprising to share it with mountain bikers.

Yet during this stretch, in addition to getting an in-your-face view of Mt St Helens, it also provided me with views of Mt Adams to the east, some attractive cascades beneath Windy Pass, and even Mt Hood way in the distance to the south.

At about a half-mile into the hike, I encountered one of those Geostation Earth Observatories where seismic activity is monitored.

It looked like there was a bomb shelter-like structure that I’d imagine might be there for an employee to escape to should another eruption and pyroclastic flow should occur.

In addition to the scientific infrastructure here, I also noticed that it had a nice view towards Spirit Lake.

At roughly 3/4-mile from the trailhead (or 1/4-mile from the observatory), I reached a bend in the road where I could look towards some cascades tumbling into a drainage flowing east.

Then, at about 1.7 miles from the trailhead, I reached a junction where the unpaved road (or Truman Trail) descended to the right while the so-called Abraham Trail ascended to the left.

I kept right to take the road to its end in another 0.3-mile.

At the end of the service road, there were reassuring signs mentioning Loowit Falls so I knew I was in the right place so far.

Behind the sign, I continued straight to cross the first of a handful of lahar zones (basically drainages prone to destructive mud flows and flash flooding should the volcano erupt) as I now embarked on the Windy Trail.

At about 0.8-mile along the Windy Trail, I encountered another signed trail junction, where I kept right to go across another drainage and onto the Loowit Trail.

Going left at this junction would have taken me up to Windy Pass.

The Loowit Trail would continue to move west across the northern slope of Mt St Helens for the next 0.9 miles.

This involved crossing at least four more creeks or lahar-prone drainages, and each of the crossings involved some degree of going down and up steep embankments with rather sketchy footing.

Some of the drainages had interesting small cascades or waterfalls, which may also serve as useful cooling off spots.

Anyways throughout this 0.9-mile stretch of trail, I continued to get imposing views of the caldera of Mt St Helens while witnessing mats of wildflower blooms as well as impressive views towards Spirit Lake.

After around 0.9-mile beyond the Windy Pass Junction, I then reached another signed trail junction where I then kept left to follow the trail towards Loowit Falls.

Although the trail signage suggested that it was only 1/4-mile to get to the Loowit Falls Viewpoint, my GPS logs indicated that it was more like a 1/2-mile in each direction.

It also felt longer because nearly this entire spur trail was uphill.

Nevertheless, after around 1/4-mile from the signed trail junction leaving the Loowit Trail, I started to get tantalizing views of Loowit Falls watched over by Mt St Helens’ imposing crater.

The closer I got to Loowit Falls, however, the less of the crater rim and lava dome that I was able to see.

During my late June 2021 visit, I happened to see a family of mountain goats around Loowit Creek, which blended in quite well with the bright volcanic surface supporting both the falls and its watercourse.

Speaking of the watercourse, it looked like Loowit Falls was sourced by a combination of the Crater Glacier (I’ve also seen it referred to as the Crescent Glacier) along with any additional snow accumulations.

What’s remarkable about this glacier is that it’s arguably one of the few left on earth that’s actually “growing”.

I suspect the reason why is because it sits completely at the foot of the lava dome, which itself protrudes and grows from the heart of the crater of Mt St Helens.

I was content with my look-but-don’t-touch views of Loowit Falls and its extensive string of cascades further downstream, because I’d imagine you’d need abilities like those mountain goats that I saw to get up and down the steep cliffs.

This was my turnaround point, and fortunately, the remainder of the hike was pretty much downhill most of the way.

Loowit Falls resides in the Mt St Helens National Volcanic Monument, which is within the Gifford Pinchot National Forest near Cougar in Skamania County, Washington. It is administered by the USDA Forest Service. For information or inquiries about the area as well as current conditions, visit their website.

Because I did the Loowit Falls hike from the Windy Ridge Lookout, I’ll describe the driving directions for the route that I used to get there from Portland.

From Portland, I drove the I-5 north for about 29 miles to the WA-503 exit towards Woodland/Cougar.

I then headed east on the WA-503, which became the Lewis River Road en route to Cougar, and I followed this road for about 47 miles.

Near the headwaters of the Swift Reservoir, I then kept left to go onto the NFD-25 Road, and I took this road for the next 25 miles.

Note that the NFD-25 Road seemed to have a slot of surprise dips as I suspect that many parts of the road were sinking so you may have to slow down to avoid catching air on some of those dips (I’m not kidding!).

Eventually, the NFD25 Road intersected with the well-signed NF-90 Road (Windy Ridge Road) on the left, and I took this road for the remaining 16 miles to its end at the Windy Ridge Viewpoint Parking Lot.

Overall, this drive took me about 3 hours.

Note that I could have also taken the I-84 east to the Wind River Road via Cascade Locks and Carson from Portland, but that 127-mile drive would take about 3.5 hours plus require a toll to cross the Bridge of the Gods.

As for geographical context, Cougar is about 54 miles (about 90 minutes drive) northwest of Carson, 58 miles (over an hour drive) northeast of Portland, Oregon, and 172 miles (3 hours drive) south of Seattle. 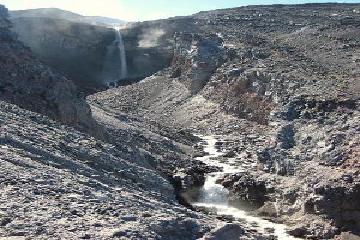