Martha Falls was a waterfall that we got to see in a couple of different ways.

The first way allowed us to experience it from a distance across Stevens Canyon along the Stevens Canyon Road on the southeastern slopes of Mt Rainier.

The second way took me down to Unicorn Creek along the Wonderland Trail, where I was able to get close to one of the many tiers that comprised the 150ft waterfall.

I’ll describe each of these methods below.

Experiencing Martha Falls in its entirety

To experience Martha Falls in its entirety, we had to drive to an official pullout or wayside with some signage about glaciers (see directions below).

From this vantage point, we only managed to see an angled view of the very bottom tier of the series of cascades and waterfalls making up Martha Falls.

In order to get the full view that you see in the photo above, I had to walk along the Stevens Canyon Road until most of the cascade revealed itself.

I’m not sure if walking along the road is a sanctioned practice or not due to the lack of trails, but it was the only way I could think of to truly experience the entirety of Martha Falls.

Of course, the very distant look-but-don’t-touch view of the waterfall left me wanting to do more, but that was about it as far as experiencing the falls in this manner.

By the way, the views across Stevens Canyon from the road also provided me some context of the Wonderland Trail as I could see it from the higher vantage point of the Stevens Canyon Road.

As for getting close to Martha Falls, I managed to do this by parking close to the Wonderland Trail access (see directions below).

After walking a few paces from the pullout along the Stevens Canyon Road nearest to the Wonderland Trail, I then descended the trail along a well-maintained footpath.

The trail would continue to descend for about a mile (there were still some snow patches during my mid-June 2021 visit) before reaching a one-sided log bridge fronting one of the tiers of Martha Falls.

Even though I was able to feel the rush of Unicorn Creek (some of its waters actually went above the one-sided log bridge), I was a little disappointed in that I could only see about 30ft or so of its entire drop.

Indeed, if this was the only way I had experienced Martha Falls (as the Stevens Canyon Road views seemed unsanctioned), then I might have been tricked into thinking this waterfall was only 30ft tall or shorter!

Anyways, once I had my fill of this frontal perspective of the waterfall, then I had to hike back up to the Stevens Canyon Road, which made this upside-down hike rather hot despite the afternoon shade I was getting along the trail.

Overall, I spent about an hour on the trail, but the uphill on the way back definitely made me sweat a lot despite the presence of snow in some spots.

Martha Falls resides in Mt Rainier National Park near Puyallup in Pierce County, Washington. It is administered by the National Park Service. For information or inquiries about the area as well as current conditions, visit their website.

Martha Falls is accessed from the Stevens Canyon Road on the eastern slope of Mt Rainier.

In order to experience the waterfall in its entirety, I drove the Stevens Canyon Road about two miles east of what Gregory Plumb (author of the Pacific Northwest Waterfalls book

we used) called “The Bench,” which is a hairpin turn near Bench Lake leading into Stevens Canyon or about four miles west of Box Canyon.

As for getting close to the bottom of Martha Falls, I had to drive to a pullout roughly 0.8-mile north of “The Bench”.

This pullout on the right side of the Stevens Canyon Road as I descended (heading north) was fairly long so I’d imagine there was ample parking since most people don’t bother to stop here.

After parking the car, I just had to walk a few paces downhill to reach the spot where the Wonderland Trail crossed the Stevens Canyon Road.

As for geographical context, the Nisqually Entrance of Mt Rainier was 86 miles (supposedly under 2 hours drive) from Seattle and 50 miles (supposedly a little over an hour drive) from Puyallup. Of course with all the traffic restrictions and traffic lights, the reality was that it w at least 30-60 minutes more than what I’m quoting above.


Fixated on the distant lower falls in motion before zooming out and revealing its full context. This was from the official pullout.


Top down sweep of falls starting with a peak then ending at its partial base with the sound of car whizzing by. 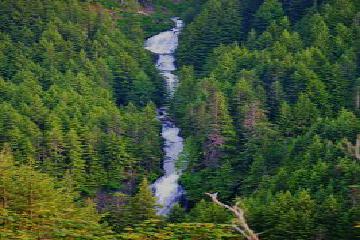 Martha Falls November 15, 2012 10:21 pm by Ronald Grant - For a long time Martha Falls really confused me. I had taken pictures from a pullout on the Stevens Canyon highway and from the wonderland trail. The two groups of pictures were definately not the same falls. I finally got returned to that pullout, walked along the shoulder for a ways (100 Yds.?) and got… ...Read More