Sol Duc Falls probably was the one waterfall that best embodied the rainforest feel of Olympic National Park as far as we were concerned.

Nestled within a lush evergreen rainforest full of ferns and moss-covered old growth trees, this 40-50ft triple waterfall on the Sol Duc River seemed like an appropriate fit for its surroundings.

It certainly seemed like the most popular waterfall in the Olympic Peninsula, especially with photographers as we had seen post cards or large format posters capturing this subject in long exposure.

The first time we visited Sol Duc Falls was during a Summer rain in August 2011, where the overcast skies really seemed to bring out the vibrant greens of the rainforest.

The second time we visisted this waterfall in June 2021, it was under sunny conditions though the forest cover seemed to have provided ample shade throughout the excursion.

Personally, I felt that the Sol Duc Falls experience was enhanced under the rainy or at least overcast conditions than it was under sunny weather.

It was almost as if the overcast skies and the moisture in the air brought out the colors (especially the greens) of the rainforest even more thanks to the more even distribution of sunlight.

Furthermore, when it was sunny (and warm) on our second visit under sunny skies, I swore it felt muggier because of the humidity resulting from the Olympic Peninsula’s high annual rainfall (typically over 100 inches of rain per year).

By the way, I’ve also seen this waterfall referred to as the Soleduck Falls, which was actually the accepted spelling until the State of Washington Board on Geographic Names officially changed it in 1992.

Even the trailhead signage still referred to the trail leading to Sol Duc Falls as the Soleduck Trail.

According to the park service literature, the word itself was said to be a Quileute (or Quillayute) word meaning “magic waters”.

The straightforward hike to Sol Duc Falls from the fairly large parking lot (see directions below) was about 1.6 miles round-trip according to the traihead signage.

That said, my GPS logs indicated that we had hiked about 2.2 miles round-trip or 1.1-mile in each direction.

It was a wide, gently-undulating path along the forest floor so we almost always were in the shade of the lush forest canopy.

Because the Olympic Rainforest is one of the oldest old-growth forests in the Pacific Northwest (some trees have taken root up to a 1000 years ago), we saw numerous trees with very wide trunks.

A few fallen trees even exhibited numerous rings providing evidence of their age (something our daughter did attempt to count albeit unsuccessfully).

Indeed, when we first came here in August 2011, it was easy for Julie to imagine Edward and Bella (from the Twilight saga

) flying amongst the tall trees above us.

In my case, it was easy for my eyes to wander upwards as I would gaze forward following the trail contour before letting the vertical lines from the trees take over my imagination and play tricks with my mind.

At about the half-way point of the trail, there was a footbridge over a side creek feeding the Sol Duc River with an attractive cascade that seemed to compel many hikers to pause.

Shortly before the trail reached a footbridge traversing the Sol Duc River, we noticed an intriguing log cabin, which was built by the Civilian Conservation Corps (CCC) in 1939 shortly after Olympic National Park was established.

On the footbridge over the river, this was where we got our first (and perhaps most satisfying) views of the three-pronged Sol Duc Falls.

Due to the mist it tended to throw up in its narrow gorge, we’ve found that the bridge tended to be quite muddy.

On the other side of the bridge, a short spur path on the left led to additional mist-laden lookouts providing us with an even closer perspective of the waterfall’s brink.

The vast majority of people turned around at Sol Duc Falls, but more ambitious hikers could backtrack to the bridge and then continue south to pursue highland lakes.

However, both times we’ve visited this waterfall, we were content to return to the trailhead, and we wound up completing the hike in a leisurely 1-2 hours.

Sol Duc Falls resides in Olympic National Park between Forks and Port Angeles in Clallam County, Washington. It is administered by the National Park Service. For information or inquiries about the area as well as current conditions, visit their website.

There is an entrance fee station along Sol Duc Hot Springs Road.

The turnoff for Sol Duc Hot Springs Road is about a little over 8 miles west of the Storm King Visitor Center turnoff along the US101.

It was pretty much just west of where Lake Crescent ended.

It’s also about 28 miles west of Port Angeles or 28 miles east of Forks along the same highway.

For context, Port Angeles was about 57 miles (over an hour drive) northeast of Forks and 82 miles (or 2.5 hours drive including a ferry ride [so it would take more time than this]) from Seattle. 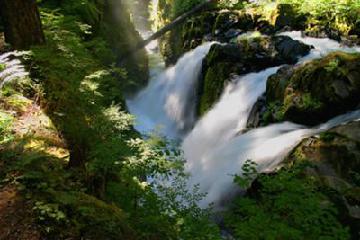 Sol Duc Falls – Olympic National Park January 4, 2011 4:47 am by Roger Weight - After a short hike, I reached Sol Duc Falls in the heart of the Olympic National Park. It was the second week in July, and the weather was nice and sunny. Had it not been sunny, my picture would have been quite different. As it is, it has lots of highlights where the sun shown… ...Read More