The Savu-i-one Waterfall (or Savuione Waterfall or just Abaca Waterfall) is probably the feature waterfall attraction of the remote Koroyanitu National Park in northern Viti Levu.

This waterfall seemed much taller when we saw it from a distance as it consisted of multiple tiers.

When we reached the base of the main drop, we only saw one of those tiers (though this one by itself was pretty tall anyways).

Looking back on this excursion, we had to go on quite a bit of adventure while improvising with the transport situation because it turned out to be very nontrivial to reach.

For starters, we needed to arrange for transport in Lautoka (we arranged it at the Lautoka Hotel).

That was because the access road turned out to be a rough and muddy 4wd road requiring high clearance.

There was no way our rental car would’ve made it.

Plus, we didn’t even know the way there as there we no signposts indicating where we should be going.

Once the helpful receptionist made the call to a local willing to transport us for a fee, we waited out the arrival of the driver (took maybe a half-hour or so) before we were on our way.

About an hour later, we made it to the village of Abaca (pronounced “am-BAH-thuh”).

Given how remote this place seemed, we asked the driver how many visitors they get here, and he said that 2,500 people visit annually though only there are only 80 residents.

For that much effort to even get to this remote village, we thought for sure there would be way less than 2,500!

After agreeing to a meeting time (so he could pick us up) and paying the park fee, we self-guided ourselves on the hike, which wasn’t easy.

After navigating some very slippery and steep sections while gradually climbing along the trail for about 50 minutes, we reached the base of the Savu-i-one Waterfall.

There were lots of wet plants brushing against our clothes (wetting them big time) as well as lots of insects including the everpresent mosquitoes as well as larger insects that looked to be wasps.

Even though we turned around at the falls, it looked like the trail precariously crossed the stream beneath the base of the waterfall tier we were at before going up some slippery rock steps to traverse the embankment on the other side of that stream.

It didn’t look easy nor did we feel like risking a slip and fall over one of the lower tiers of the falls just downstream of us.

But had we continued, it would’ve formed a complete loop returning to Abaca in probably a similar amount of time as our return hike.

The Other Side of the Loop

Back at the car park and trail junction, we did walk part of the other side of the loop, passing by the Vereni Waterfall.

This involved some stream walking to find where the trail continued. Eventually, we ended up at a hilltop beyond the Kokobula bure (pronounced “KOH-kohm-boo-luh BYOO-rey”).

This hilltop yielded panoramic views of the Savu-i-one Waterfall (including its upper and lower tiers) above us as well as the Pacific Ocean with other red-roofed bures (or huts) below us.

We turned back at this point and after 20 minutes, we were back at Abaca waiting about 35 minutes before our agreed-upon 1pm pick-up.

Overall, we spent about 3.5 hours for the hiking part of the adventure.

Savu-i-one Waterfall resides in Koroyanitu National Heritage Park on the island of Viti Levu, Fiji. For information or inquiries about the area as well as current conditions, visit the official Fiji Tourism website.

We can’t tell you exactly how to take the roads from Lautoka to the village of Abaca. However, we can tell you how we at least got hooked up with the local driver that got us there.

From the Nadi (pronounced “NAN-di”) airport, we drove for about 30 minutes towards Lautoka (25km to the north). We don’t know the specific directions for Lautoka Hotel since we didn’t have a detailed map or road atlas of Fiji, but we were able to find it without too much trouble since it seemed to be a fairly central feature of the town. Plus, the locals know where it is so it wouldn’t hurt to ask when in doubt.

The Lautoka Hotel graciously let us park our rental car on their property while we were on this excursion. We then rode on someone’s SUV for about 15km (taking about an hour; it was a very slow and bumpy 4wd road) to get to Abaca, where the mountain village was also where the trail began. 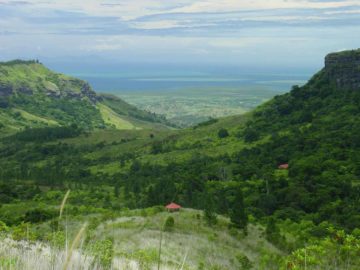