Lower Falls (of the Yellowstone River)

About Lower Falls (of the Yellowstone River)

The Lower Falls (of the Yellowstone River) was by far the most popular waterfall in Yellowstone National Park, and it could very well be the park’s signature waterfall.

But power and water volume aside, what made this waterfall so memorable was the setting.

After all, it sat at the head of the Grand Canyon of the Yellowstone River, which was an attraction in and of itself.

The Canyon possessed the combination of precipitous jagged cliffs, wildlife sightings, and the mesmerizing color that included the namesake yellow rocks that earned the national park its name.

I suspect that the yellows were the result of the presence of sulphur in the area since Yellowstone was full of volcanic and geothermal features as most of the park was pretty much sitting atop the vent of an active supervolcano.

Given all the things this waterfall had going for it, we felt compelled to put the falls high up on our Top 10 Waterfalls in the USA List.

We’ve managed to experience this waterfall in a handful of ways, which we’ll detail in the following sections.

This used to be the first viewpoint were we were able to see Lower Falls while driving the one-way North Rim Drive in a clockwise direction about 1.2 miles from Canyon Village.

However, they recently re-directed the North Rim Drive such that it was now moving in a counterclockwise direction!

So given that change (to better manage the heavy visitation, I’d imagine), the pullouts and parking spaces specific for Lookout Point were now roughly 2 miles from Canyon Village.

It was about 0.4 miles further east of the Brink of the Lower Falls, which now had a sizable parking area as well as some restrooms (described later on this page).

Once at the parking area for Lookout Point, it was a short 275-foot walk on a well-used paved path leading to the end, where we were able to get the view you see in the picture directly above.

Because of how easy it was to get such a good view of the falls (it yielded the photo at the top of this page), this lookout also tended to get really crowded.

From the same pullout as Lookout Point, there was a steep but paved trail descending to the Red Rock Point.

It was about a half-mile trail that initially descended a handful of switchbacks before down even more steeply on steps.

The trail eventually ended atop a narrow ridge where there was the lookout deck directly at the falls.

Adjacent to the sanctioned viewpoint was a noticeable reddish rock or cliff.

I suspect that this was how Red Rock Point or Red Rock Lookout got its name.

Given that we needed to exert ourselves (especially for the climb back up to Lookout Point), it was a much quieter spot (though by no means devoid of people) to enjoy the waterfall than for Lookout Point up above.

I even remembered feeling a slight bit of spray that blew downstream from the Lower Falls at this spot. Pretty cool!

It was also from this spot that we happened to notice some people on the Uncle Tom’s Trail across the canyon looking like ants compared to the waterfall.

That observation kind of did away with any doubts we might have had about how massive this waterfall was strictly from looking at the photos!

So far, both times we’ve been to the Grand Canyon of the Yellowstone area (once in June 2004 and another in August 2017), we had been denied accessing this viewpoint.

For one reason or another, trail work was being done, which prevented us from experiencing the power of the falls right from its brink.

Thus, all we can really say about this was that we would have to descend some 600ft in a half-mile and then get back that distance and elevation so it would be quite the workout like it was for Red Rock Point.

With the recent re-direction of the one-way North Rim Drive in a counterclockwise manner instead of clockwise, this was now the first stop (roughly a mile from Canyon Village).

Even though there was a pretty large parking area here, there tended to be a traffic jam or backup on the one-lane, one-way road leading to that parking area.

People waiting for a parking spot to be vacated would often clog up that road and cause congestion all the way out to the Grand Loop Road!

If your intent is to park here and walk down to the brink of the Lower Falls, then obviously this would be the place to park.

However, if your aim is to go to other lookouts and reduce the amount of walking, we’ve noticed that there tended to be a surprising amount of available parking spots and pullouts further to the east.

That said, if you do manage to score a spot here at the first spot, you mind as well take advantage of it.

That’s because if you find out later that none of the parking spaces were available further on, then you’d have to drive a three-mile loop just to get back to this one-way drive and try again!

The Uncle Tom’s Trail led us to an overlook where we almost got face-to-face with the Lower Falls of the Yellowstone River.

The large parking lot for the Uncle Tom’s Trail was about 0.5 miles along the South Rim Drive.

Note that the Chittenden Bridge over the Yellowstone River was the start of the South Rim Drive.

From there, we then had to descend some 328 metal grate steps to the overlook at the end of the trail.

Since we could see through the grate steps below us, I could see how if we were fearful of heights, this “trail” could definitely bring out the fear of heights and the resulting butterflies in our stomachs.

The large parking lot for the Uncle Tom’s Trail was about 0.5 miles along the South Rim Drive.
At the overlook, there was a square lookout area with real limited space.

Considering how popular this trail was, it frequently got crowded here.

This was probably the closest frontal view of the falls that we could safely attain.

We were also lucky in photographing this waterfall with a rainbow as we happened to show up at the right time of the morning during our June 2004 visit.

I had seen some old photos of the Lower Falls from its base, where an example of such a photo was seen in a book we purchased called The Guide to Yellowstone Waterfalls and Their Discovery

I believe the way they got there involved somehow deviating from the Uncle Tom’s Trail and scrambling down one of the very steep gullies to get to the base of the canyon.

But from looking at how steep the cliffs were while doing the Uncle Tom’s Trail, it looked very risky.

Finally, during our August 2017 visit, almost the entire South Rim area with the exception of Artist Point was undergoing major restoration and re-construction work.

The large parking lot for the Uncle Tom’s Trail was about 0.5 miles along the South Rim Drive.

So we were unable to experience this spot on that visit, and it would likely be changed once the work would be complete some time in 2018.

This was the furthest spot to view Lower Falls of the Yellowstone River from the canyon’s south rim.

It was also where we were able to get that classic photograph of the Yellowstone River cutting through the Grand Canyon with the Lower Falls as the backdrop.

The parking lot for this viewpoint is at the end of the South Rim Drive at 1.6 miles east of the Chittenden Bridge.

There was a bit of a short paved stroll from the long parking area eventually leading to some steps where there were about three main spots providing views westward towards the waterfall.

Anyways, the first of the viewing spots was kind of an informal one and it stood by the start of the steps, and this was where we were able to see the Lower Falls framed by trees as you can see above.

The second view was in the middle of a wide path where we were able to look upstream and witness the Yellowstone River flowing at the bottom of the canyon with the Lower Falls acting as the backdrop.

The third viewpoint was the one jutting out the furthest towards the canyon.

This afforded us nice distant views of the Lower Falls framed by the V-shaped Grand Canyon of the Yellowstone River.

When we looked in the other direction, we were also treated to psychedelic colors on the cliffs that really jumped out at us in the early afternoon.

Like with other easy-to-access overlooks (as with Lookout Point on the North Rim), it did get quite crowded at all of the viewpoints.

In fact, with the crush of people at all the choice viewing spots, it could get pretty claustrophobic even though we’re talking about an open-air viewing area!

If you’re looking for a more tranquil experience, Julie and I did manage to enjoy this spot with some degree of solitude, but that was only because we came here at sunrise.

That said, to be honest, sunrise wasn’t the best time to view this east-facing waterfall.

Moreover, I think you’d have to be here in mid-morning in order to take that classic shot of the waterfall with a rainbow in the best lighting.

We weren’t patient enough to stick around this lookout for that long, however.

Lower Falls is in the Canyon section of Yellowstone National Park.

All the ways to experience it described above were accessed from this fairly developed part of the park.

In order to access the North Rim Drive from Canyon Junction, we had to drive south on the Grand Loop Road for about 1.3 miles before turning left onto the correct one-way road.

In order to access the South Rim Drive from Canyon Junction, we had to continue south on Grand Loop Road for about another mile (roughly 2.2 miles south of Canyon Junction).

Then, we turned left to cross the Chittenden Bridge, which traversed the Yellowstone River and began the South Rim Drive.

The Canyon Junction was on the Grand Loop Road about 15.4 miles north of the Lake junction (through Hayden Valley), 11.5 miles east of the Norris Junction, or 18.3 miles south of the Roosevelt Junction (over Dunraven Pass).

Guide To The Best Waterfalls in Yellowstone National Park 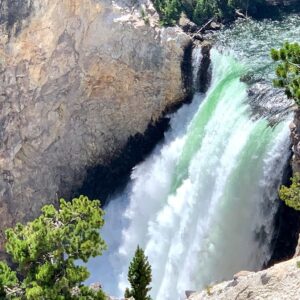 Lower Falls Of Yellowstone (Wyoming) October 11, 2021 5:04 am by Rick A. Ludwig (aka Trip T. Akers) - Located in Yellowstone National Park, this is an amazing view of the Canyon inside the park. ...Read More