The White Cascade (also referred to as Glen Aulin Falls) was the second major waterfall along the Tuolumne River that we encountered as we hiked from Tuolumne Meadows to the Glen Aulin High Sierra Camp.

Its main tier is said to fall roughly 50ft even though it’s really part of a continuous stretch of cascading whitewater that started well upstream before Tuolumne Falls (just around the footbridge crossing the river).

The stretch of whitewater terminated further downstream of the cascade below the Glen Aulin camp.

We spent a couple nights at the adjacent Glen Aulin High Sierra Camp as part of a 3 day 2 night backpack so we had plenty of time to enjoy this waterfall at various times of the day.

In fact, we thought this campsite was well situated as it was a perfect spot to refill on water at the waterfall’s plunge pool as well as relaxing by its shores.

The only inconvenience was that there was a bear that visited this camping area frequently looking for a freebie.

I’m guessing it already had a taste of high energy human food and didn’t want to go back to nuts, plants, and insects.

Nonetheless, we could totally see why the High Sierra Camp would be bustling with activity in the Summer months.

Fortunately for us, we happened to show up before they were open for business so it was pretty much backpackers only on the Memorial Day weekend in 2004 that we did this.

The High Sierra Camp and waterfall are about a half-mile beyond Tuolumne Falls (the trail description leading up to Tuolumne Falls is on a separate page).

Having made it this far into the hike, I have to believe that day trippers using this waterfall as a turnaround point must be real dedicated and determined.

That’s because it would be 11 miles round trip with over 500ft elevation loss (or gain on the way back).

The Glen Aulin High Sierra Camp was also a junction spot where a few other trails branched out from the Tuolumne River Trail.

However, in order to continue towards more waterfalls on the Tuolumne River, we merely intended to follow the trail that flanked the river.

So we can’t say much more about what the other trails do.

White Cascade or Glen Aulin Falls resides in Yosemite National Park near Mammoth Lakes in Mono County, California. It is administered by the National Park Service. For information or inquiries about the park as well as current conditions, visit their website.

This waterfall shares the same trail as that of Tuolumne Falls.

So see that page for the directions and most of the trail description through Tuolumne Meadows.

To give you some context, this hike is accessible when the Tioga Road has been mostly snow free, which also means we would be able to access the trailhead from Mammoth Lakes (roughly an hours drive; Hwy 120 turnoff from Hwy 395 is just south of Lee Vining). Mammoth Lakes is roughly 5 hours drive from Los Angeles via the Hwy 14 and Hwy 395. 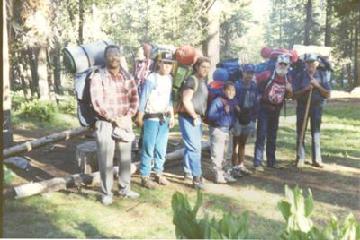 My Glen Aulin Backpacking Trip October 31, 2008 5:34 am by Adrian - My most successful backpacking trip was from Tuolumne Meadows to Glen Aulin with my two sons, my nephew, my oldest son's friend, and two of my best friends (the two handsome old guys on the right side of the picture). To see all the water falls in the early summer is truly beautiful. The trip… ...Read More